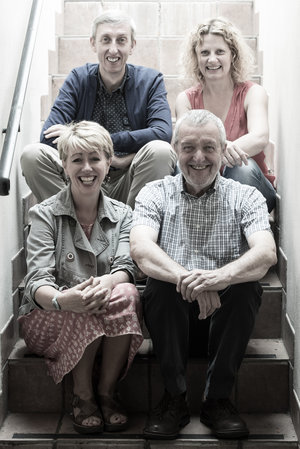 Part of this autumn’s women in jazz series a welcome return of award-winning saxophone player Karen Sharp with her long- established line-up of Nikki Iles, Dave Green and Steve Brown – world class musicians who also happen to be great friends.

Born in Suffolk in 1971, Karen developed a love of music from an early age. She took up the piano and clarinet whilst at primary school and it was not long before she began writing music and working as an accompanist for local music groups. After graduating in composition at the Royal Northern College of Music, Karen discovered a love of jazz and was inspired to play the tenor sax by two giants of improvisation – Dexter Gordon and Sonny Rollins.

On relocating to London in 2000, Karen’s career took off when she was asked to join Humphrey Lyttelton’s band with whom she toured the UK and Europe for four years. During this period Karen also worked hard to establish her own band, recording the first of five albums under her own name and touring at festivals and jazz clubs. She has also toured and recorded extensively as a ‘side man’ with some wonderful musicians that include Tina May, Nikki Iles, Esther Miller, Jeremy Pelt, Alan Barnes, John Dankworth and Jacquie Dankworth.

A busy and popular musician with an accessible yet distinctive style, Karen has won the tenor saxophone category of the British Jazz Awards on numerous occasions. She tours regularly with her quartet which features Nikki Iles, Dave Green and Steve Brown and she plays with numerous larger ensembles including Robert Fowler’s ‘Gerry Mulligan Concert Jazz Band’, Steve Waterman’s Big Band and the Stan Tracey Big Band.

More recently Karen was delighted to be part of the ‘Guy Barker Big Band’, performing at the BBC proms in 2015 and 2017. Recent recording projects include the ‘Barnes/O’Higgins – The Sax Section’, a project for five saxophones, Alan Barnes’ ‘A Christmas Carol’, and her latest quartet album, ‘The Sun, the Moon and You’ to be released March 2018 on ‘Trio Records’.

With her quartet she creates a unique sound that is warm, spontaneous and exciting, incorporating free flowing improvisation with almost telepathic ensemble playing.